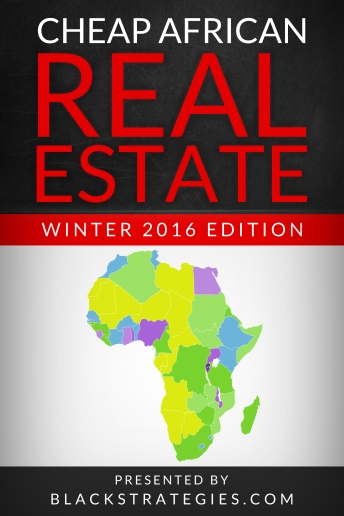 “Cheap African Real Estate” is the new ebook by architect/designer and author William Edward Summers that lists some of the least expensive real estate on the market in Africa. Unlike the United States there is no multiple listing service in Africa so locating the best buys requires much research as well as the right connections. The listings are direct links to the sellers.

Just like California in the fifties Africa is a region that is exploding with opportunity for real estate investors. Between now and the end of the century demographers believe that the African population will grow from 1.3 billion today to 4 billion., with Nigeria alone increasing to 1 billion people. This is many times the post war boom in the US that brought record prosperity to America for over half a century. Right now six out of ten of the world’s fastest growing economies are in Africa. To put this growth into perspective consider that during the last ten years the increase in the GDP of the U.S. and China was in the 7% range while Nigeria’s was 164%.

Within the pages of “Cheap African Real Estate” are incredible deals such as beachfront building lots for only a few thousand dollars, and a condominium with a view of all three Pyramids for the price of a used car. The most valuable land on earth is in Africa thanks to it’s natural resources that include gold, diamonds, oil, industrial minerals, precious gems, rare hardwood forests, and excellent farmland with flora and fauna of every kind.  Surprisingly, even in mega-resource rich Sierra Leone and the Congo there are deals presented in the book.

“Cheap African Real Estate” is available directly from http://www.blackstrategies.com  in PDF form during the pre-release for the first two weeks. Next is the Amazon Kindle release. As with all real estate the early bird gets the worm, and at the best price I might add. So those looking for the next big thing in real estate might want to obtain  “Cheap African Real Estate” now.

Please include your email for delivery